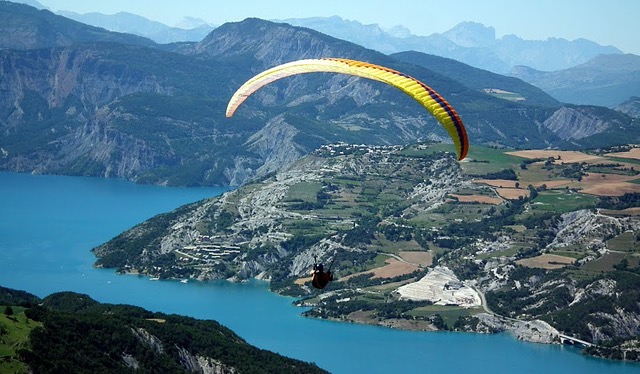 23 Sep Getting to know your SnoworksGAP trainers (part 2)

In Summer I live back in the UK with my lovely lady and my beautiful German Shepherd dog. Although I love riding my road bike and mountain bike I also race enduro motorbikes, but my real summer love is flying my paraglider.

I enjoy flying all over the world and can often be found in Spring flying home from work on the ski slopes of Courchevel down to home in the valley floor, a pretty cool way to get home from work and quicker than the bus! However, amongst the thousands of kilometres, I have flown my Spanish trip last summer was one to be remembered for many years to come.

The take-off point was to be a mountain called Lihar, a large lump of rock sticking out of the Spanish plateau near a place called Algodonales. The plan was to try to fly 40 km downwind to a place called Rhonda and then the hard bit to fly back. Paragliders have no engines so we would just be using thermals (columns of rising warm air) to get the required height.

The take-off areas are always a bit chaotic with pilots getting ready so I always like to find a quiet place where I can sort out my kit and get my head in the right place ready to leap off and fly. 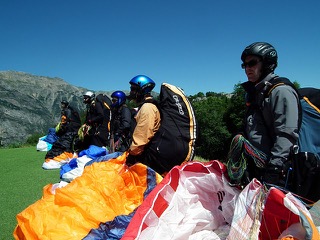 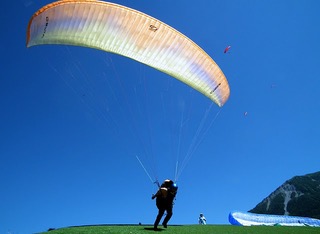 My take-off went well I was in the air and searching for my first thermal. This is probably the most fraught point of a day paragliding, trying to find the thermals with another 30+ paraglider pilots all looking for a thermal to take them higher. When one pilot starts climbing everybody tends to make a beeline for them as it’s clear they have found a thermal to climb in. I, however, chose not to follow the madness towards the first available thermal as I’ve seen something else to help me get the height needed. 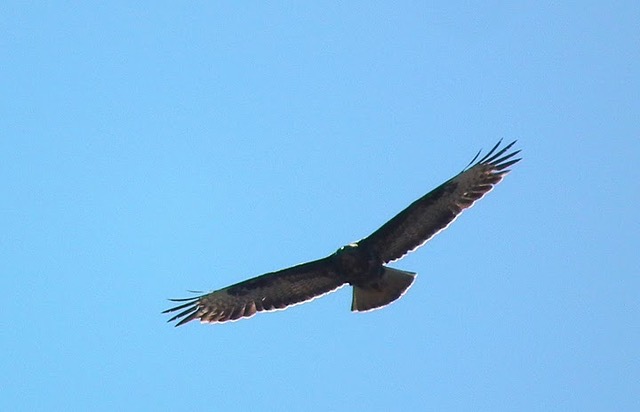 I fly at full speed out into the valley where I’ve seen a group of Griffon Vultures climbing in their thermal. As I near them I can hear their excited cackling and squawking.

I fly right into the middle of the flock of Vultures and then it was like being one of them going round and round, spiralling and climbing, keeping tight circles to stay in the middle of the thermal. There must be a hundred of them at least. The worrying part is they never seem to be looking where they are going. Remember these birds are bigger than Labradors with a 3-meter wingspan so you don’t want one crashing into you. The vultures in this area have been flying with paragliders for more than 20 years and they don’t seem at all bothered or put out when you join them.

This thermal is an amazing thermal and it takes me up to over 8000 feet. I look back to the take-off point and can see a lot of the other pilots still fighting for space in the thermals near to take off. It can be quite daunting to leave the area near to take off but with a smug smile on my face, I was away and literally flying with the birds.

Flying downwind looking for my next thermal and wondering where my flying buddies were. I radioed them to let them know I was leaving as we had arranged to meet near the next mountain on the route where there wouldn’t be so many pilots.

When I arrived there nice and high thanks to the help from my feathered friends I could see Chris and Tim. Tim looked very low having got fed up fighting for a thermal near take-off. He had left a bit low, however, I could see he was circling in a thermal so I placed myself directly over him and was rewarded with another climb this time to just over 10,000 feet. That is nearly 8000 feet higher than where we took off from. I’ve only been higher than that once before in Turkey, at a dizzy16,000 feet.

We were now perhaps 15km from the hill and very high thus our next 25km were easy to negotiate and enjoy, fly downwind find a thermal and boom back at 10,000 feet. Two hours after take-off and I’m looking down on the bullring in the centre of Rhonda.

Flying downwind is always easier than flying into wind and one of the joys of flying in this area is that the local wind changes so if you time it right it means you can fly downwind in both directions. We set off back but the wind hadn’t changed yet and we struggled to clear the first ridge perhaps with only 200 feet to spare. Slowly we kept going but because of the wind it meant that each time we thermalled up we were being blown back towards Rhonda again. It was slow going but we were moving in the right direction.

Chris lives in this area and fly’s a lot in this region and he comes on the radio to announce that he has spotted my Vulture friends flying along the next valley and we should all head in that direction. Sure enough, the Vultures knew that the wind in this valley would be less so following their obvious talent was wise and made the going easier.

I could see the mountain we had taken off from 3hrs earlier and it was slowly getting bigger and bigger as we neared our goal. A cider in the landing field bar was looking more promising but one more thermal was needed and then a lovely glide into the setting sun to land less than 50 metres from the bar! Chris’s wife Lynn was sitting in the bar waiting for us and as we packed our gliders away she arrived with celebratory drinks.

We had made it 4hrs in the air and over 80k flown. A special thanks must be said to the Vultures as without their help I don’t know if we would have made it. They have been flying a little bit longer than we have! What an amazing adventure and the icing on the cake of my many paragliding flights.

So what next? More flights, more world to see, and maybe I’ll join Lee on the next Mt.Blanc trip and fly down to Chamonix whilst he skis down on very tired legs!