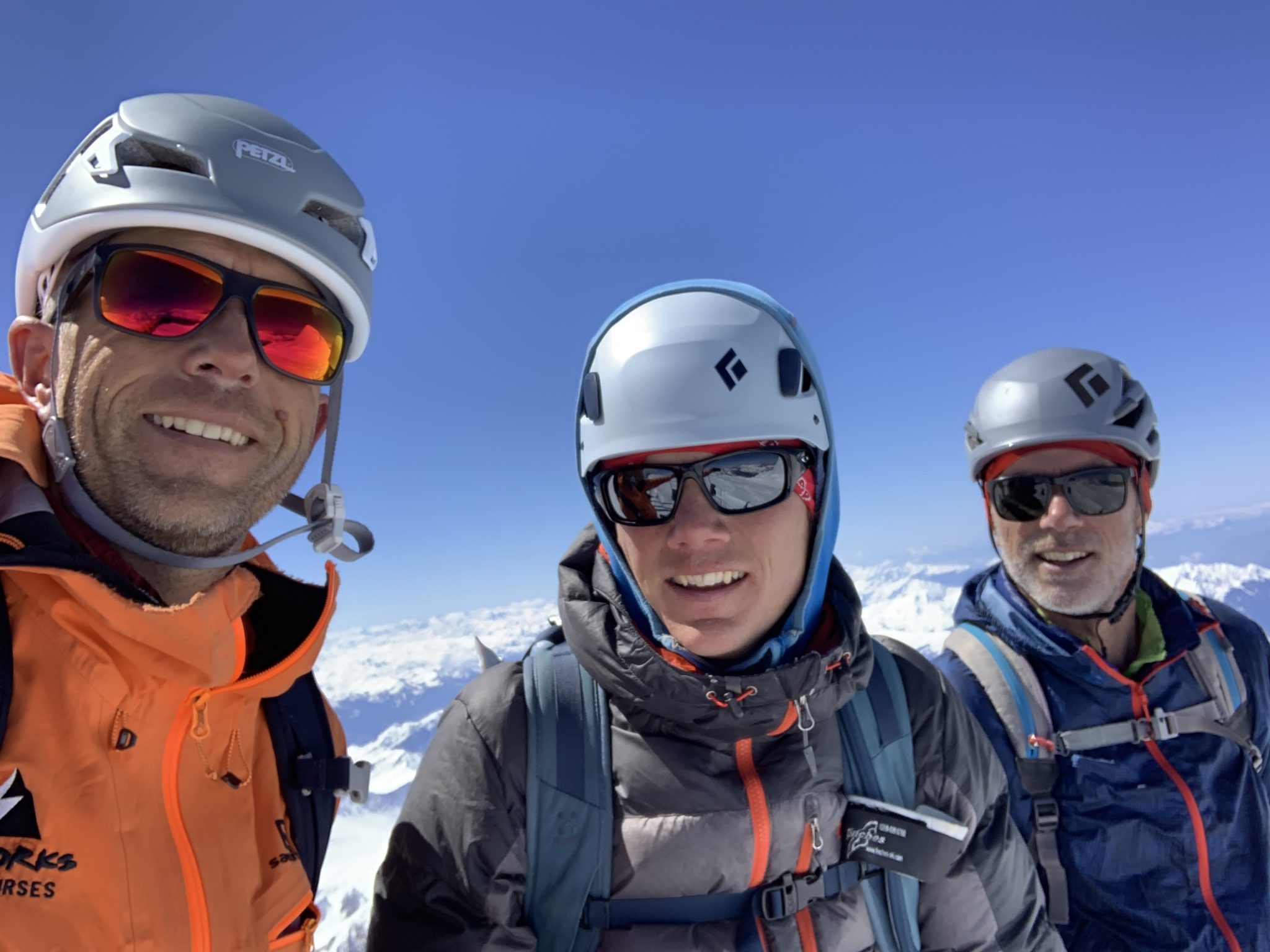 27 Aug Getting to know your SnoworksGAP trainers (part 1)

So what does Lee Townend SnoworksGAP trainer and director do in his ‘winter’ spare time ?

During the winter season of 2018/19 I took about training a higher volume of serious ski-mo training and altitude work, as I had set myself 3 goals of which 1 was to be attempted in the Spring touring season of April/May 2019.

Let’s start with a little about why?

Obvious reasons such as loving and living in the mountains and it being ‘the mountain’ of course are prevalent, however I have the good fortune of having BASI legend and membership number 1 ‘Sir Derek Brightman’ as my next door neighbour here in Bozel, France during the winter months (he isn’t knighted, but should be!). Amongst many other seriously cool attributes in his history, he was the first man to ski down the North face of Mont.Blanc from the summit on wooden skis (with metal edges) and leather boots in 1971! From his story and my desire to ski this face of this mountain this goal was born.

In addition to that I have obtained an unorthodox desire to test my body physically and mentally and see what it is capable of in harder and more extreme challenges in both my winter and summer hobbies.

I had trained, I had studied, I had contacted and researched many channels of personal and professional contact and the day before I had had a coffee with Derek at our local pub the ‘St. Roch’ and told him of my goal. With his heart filled wishes of luck and safety I drove to Chamonix and met up the day before with my 2 good friends and summit attempt partners Matt Tomlinson & Fred Dibblee, these guys not only have a wealth of experience in the mountains they are good friends I know and trust with my life and where we are going that’s a good move!

As mentioned above I like a challenge, and as Tom Hanks once said in the film ‘A league of their own’            “Of course it’s hard. It’s supposed to be hard. If it was easy, everyone would do it” So with that and my desire to test myself and my limits we decided to go from the foot of the Mont.Blanc road tunnel and summit and return in a day, the ‘norm’ and suggested route in Spring for ski touring is to go up to the mid station of the ‘Aiguille du Midi’ 2317m then traverse from there, tour up to the ‘Refuge des Grands Mulets’ 3051m then stay there, arise at 4am and summit and descend from there over a 2-day attack.

Instead we were to ‘attempt’ it from the road tunnel entrance at around 1300m to the summit with a total climb of 3500m+ over approximately 25+km!

We awoke at 1:15am and set off in trainers with skis and boots attached to our packs at 1:30am, we had all pre-agreed on an 11am turnaround, and if we had not summited by this cut off for safety reasons discussed in detail prior then we would turn back. Our first section was to prove nearly if not the hardest part of the entire day, we had wrongly assumed we would find little to no snow between our start point and the top station of the disused ‘Gare des Glaciers’ and make good ground and time here, however we not only found snow, but rotten and not the safest feeling snow in the dark causing what should have been a quick stomp to be a 2.5hr tricky set of kick turns and route finding. Once clear of the tree line and with dawn on its way over the lit up Chamonix behind us we headed toward ‘la Jonction’ where we joined the ‘Bossons glacier’ prior to this we donned our harnesses, helmets and glacier travel equipment.  From this point on we made good ground and what we thought would be easy was tough, now crossing the huge serac filled glacier proved easier, relatively speaking. The snow was in excellent condition, we crossed the glacier at around 4am and above saw all the head torches of the skiers climbing away from the refuge, we of course had planned/hoped to be with or ahead of them.

We climbed upward on steep glaciated terrain up past the ‘Refuge Grands Mulets 3051m’ chasing those that left the warmth of its hospitality that morning and being chased and overtaken by the occasional team of lycra-clad racing snakes of Chamonix coming up from behind.

Next we crossed onto and up through the ‘Côte des Cerisiers’ through the ‘Petit plateau’ and up onto the flatter and more forgiving angle of the ‘Grand plateau’. By now the sun was high, the day was heating, and the mountain was alive with climbers, ski tourers and helicopters.

The weather forecast was good for the full day, this we had of course addressed, but it was May and it was going to get warmer; the wind was kind for this altitude and location.

By now my legs were getting tired, we had been going for about 8hrs+ by this point and now reaching the highest I have ever been on skis to date (previously 4,000m in Gulmarg, Kashmir) thus the pace was slow and the air was thin, from the flatness of the plateau the angle steepened again up to the last shelter point of the ‘Vallot hut 4362m’

At the Vallot the majority of climbers and skiers leave their skis and some equipment and transfer to crampons and ice axe for the climb up the final summit ridge, to then return to the equipment and ski down the same approach. We however came to ski the 40+ º North Face so strapped our skis to our packs and joined the guided groups of climbers up the final summit ridge.

At this transition point it was now 11am ‘our agreed cut off time’ all three of us were tired, hungry, and new it was still a long way from here. We discussed the conditions, weather, snow, etc and were mentally strong enough to not fall into the trap of ‘the others are still going up’. We all agreed we would do a little more, as access to ski the North face from the Vallot is not possible, but from the ‘Grand Bosse’ we could traverse onto the face we came to ski. With a sadness in our hearts and heavy legs we had almost resigned to the fact we would not reach the summit today.

Another hour on crampons carrying all your kit, having been going for 10hrs+ gave us only another 200m in height gain where and we came together to celebrate and summarise the climb. We were just 300m short at 4,509m. Yes of course we had the ‘shall we/should we/can we chat’ but it was now midday, the sun was high and hot and that 300m climb that might take an hour or less on a standard ski tour on any normal day would take at least 2hrs or more.

There is a line in a guidebook that has and will always will stick with me that reads ‘When you get to the top, you’re only halfway there!’ Now we are all ok at skiing, confident in our abilities and chosen equipment, but after a 1:30am start, 3200m+ of ski touring over 11+hrs and the desire to ski down the steepest part and follow in Derek’s tracks we had to make sensible decisions and calling it a day was undisputed by all three.

We removed the crampons, clipped into our bindings and started our descent, whilst I and I’m sure my friends shared an internal unspoken disappointment to not reach the top we had a magnificent ski down, the first part is steep, no doubts here, on tired legs needing to do jump turns in a crevasse filled no-fall environment it was steep! Then the Grand plateau offered us powder, the Petit plateau and top section of the Bossons glacier some tricky grabby gluey spring snow resting us safe in the knowledge that we should not be coming down here any later than we were. The traverse across back to the old ‘Gare des Glaciers’ lift station was bordering on the scariest part of the day as the sun wheels and snow fell off in the afternoon sun.

Some obligatory ‘combat skiing’ through trees, mud and slush, skis off and a walk down got us safely back to the van at 4:30pm.

Plan, train, make some minor kit changes and go again! May 1st 2020 be ready Mont Blanc I’m coming back and I can only hope with the same two friends. Whilst we didn’t achieve our full goal on that day we still achieved, enjoyed, challenged, suffered and skied and what a fantastic two guys to share those experiences with. I hope we can stand on the top together in 2020. 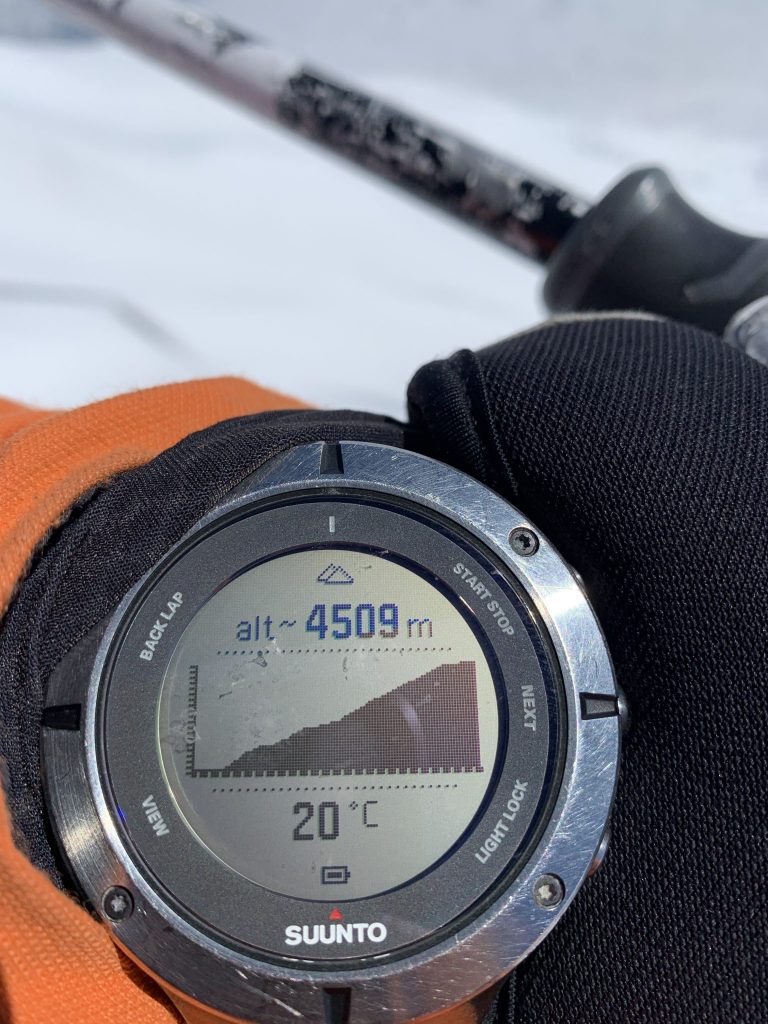 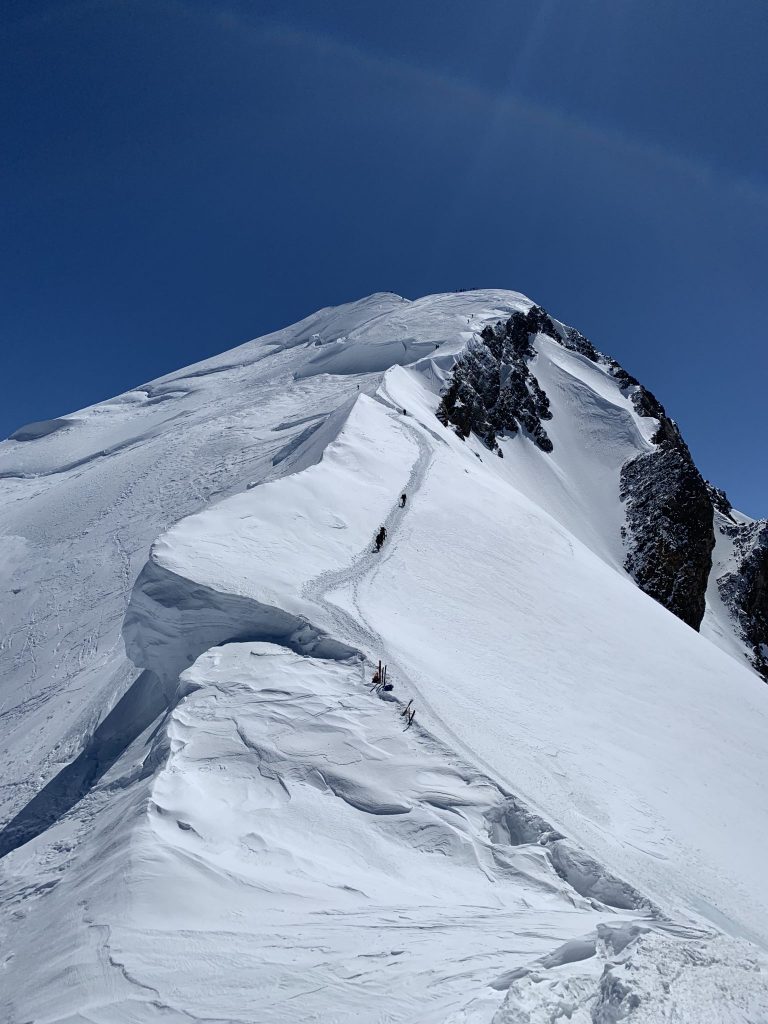